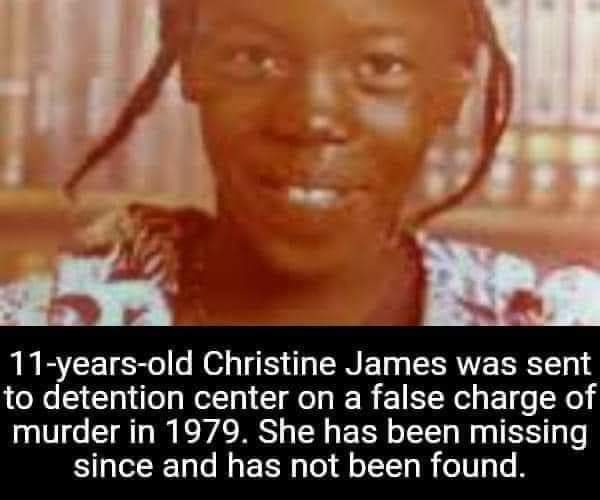 What happened to Christine Denese James??

Christine was last seen in Coleman, Florida sometime in the second half of 1979 or 1980. She was in the sixth grade at Wildwood Middle School at the time and the oldest of six children. She told a friend she was pregnant with twins and planned to run away from home and never return. Her friend tried to stop her from leaving and said she should tell her mother about the pregnancy. She has never been heard from again.

Prior to her disappearance, Christine’s life was distraught. According to her sister, their mother was addicted to drugs. Christine had also been repeatedly sexually abused by her teenage cousin, Robert Jackson Jr., and her uncle.

Robert was stabbed to death at seventeen, in May 1979, after he forced his way into Christine’s aunt’s home and attacked and beat Christine while she was babysitting there. Christine, then eleven years old, said she had stabbed him, but according to her sister, their mother had actually committed the killing. As a result of the stabbing, Christine was placed in a juvenile detention facility for a couple of months. She was released only a day or two before her disappearance.

Many agencies give the date of Christine’s disappearance as June 15, 1986, when she was eighteen. Her mother, who died in the early 1990s, never reported her missing. Her father is also dead. Her sister is still alive and anxious to learn what happened to her.